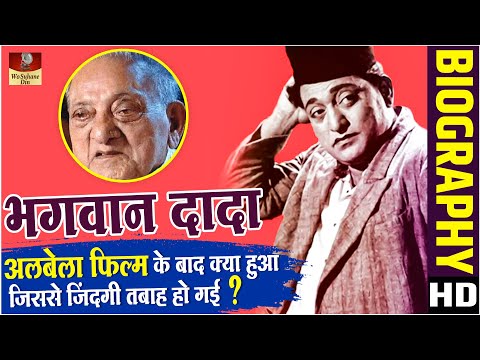 #BhagwanDada #BhagwanDadaBiography #BhagwanDadaDanceStyle #BhagwanDadaInterview #BhagwanDadaSholaJoBhadke #BhagwanDadaAlbela #BhagwanDadaKhidkiTale #BhagwanDadaBholiSuratDilKi #BhagwanDadaMarathi #BhagwanDadaMarathiActor #BhagwanDadaMarathiBana Bhagwan Dada (Marathi,1 August 1913 – 4 February 2002), also credited as Bhagwan, was an Indian actor and film director who worked in Hindi cinema. He is best known for his social movie Albela (1951) and the song “Shola Jo Bhadke”. Bhagwan Dada was born in 1913 as Bhagwan Abhaji Palav in Amravati, Maharashtra. He was the last of a textile-mill worker who worked in Mumbai textile mills and was obsessed with films. He worked as labor, but dreamt of films. He got his break with bit roles in silent films and got totally involved with the studios. He learned film-making and at one stage used to make low-budget films (in which he arranged for everything including the design of costumes and arranging meals for the cast) for Rs. 65,000. Bhagwan Abhaji Palav, popularly known as Bhagwan dada, mainly due to his love for wrestling, made his debut in the silent era with the movie Criminal. He co-directed his first film Bahadur Kisan with Pawar in 1938. From 1938 to 1949 he directed a string of low-budget stunt and action films that were popular with the working classes. He usually played a naive simpleton. One of the notable films that he made during this period was the Tamil movie Vana Mohini (1941) that starred MK Radha and Sri Lankan actress Thavamani Devi. In 1942, as part of a scene, he had to slap actress Lalita Pawar hard. He accidentally slapped her too hard, which resulted in facial paralysis and a burst left-eye vein. After three years of treatment, Pawar was left with a disabled left eye. He turned producer in 1942 with Jagruti Pictures, purchased some land and set up Jagriti Studios in Chembur in 1947. On advice from Raj Kapoor, he turned to making a social film called Albela, starring Bhagwan and Geeta Bali, and featuring music by his friend Chitalkar, or C. Ramchandra. The songs of the movie, in particular “Shola jo bhadke” are still remembered. Albela was a huge hit. After Albela, Bhagwan got C. Ramchandra and Geeta Bali together again in Jhamela (1953), where he tried to recreate the formulaic success of Albela with little success. He also directed and acted in Bhagam Bhag in 1956. After that, Bhagwan did not have any more hits and eventually had to give up producing and directing films, and sell his 25-room waterfront bungalow in Juhu and his fleet of seven cars (one for each day of the week). He took whatever roles he could get, but apart from Jhanak Jhanak Payal Baje and Chori Chori, none were roles of note, and he eventually took on bit parts in which he did his famous dance (made even more famous by Amitabh Bachchan using it as his default dance step). Most of Bhagwan’s associates left him in his time of need, apart from C. Ramchandra, Om Prakash and lyricist Rajinder Krishan, who continued to meet him even in his chawl. Bhagwan died of a massive heart attack at his residence in Dadar on 4 February 2002 In 2016, a Marathi movie Ekk Albela released which was a biopic of the actor. Join this channel to get access to perks: Welcome To Wo Suhane Din Channel. Enjoy biographies of famous bollywood actress and actors. Subscribe to get notification of latest video इस वीडियो में दिखाए गए तस्वीरें और कहानियां, इंटर न्रस्तुत सामग्री पर निर्भर हैं. कृपया ध्यान रखे, दिखाई हुई सामग्री को प्रस्तुत करने का अधिकार copyright act 1957 और section 52 एजुकेशन के उद्देश्य से देता हैं. हमारा यह चैनल और सूत्रधार उस सामग्रीका हिकार नहीं रखता. .

Best presentation. Sweet voice and nice style of narratives. Gave very good profile of the actor in such a short video. Keep it up. God bless you.

THE STORY IS HAUNTING 😭

But he will be in our hearts always & always.
Salute to your information &
Salute to dada 🙏🙏💐💐💐

Bhagwan Dada was a Great Comedian and an Artist never dies. He remains immortal due to the performance and remains at the hearts of the fans. Being change of generation, no wonder these artists are left behind due to the short lived performance these days.
Many thanks for the tribute.

From rags to riches and riches to rags

Narrator voice is so soothing!!! wow