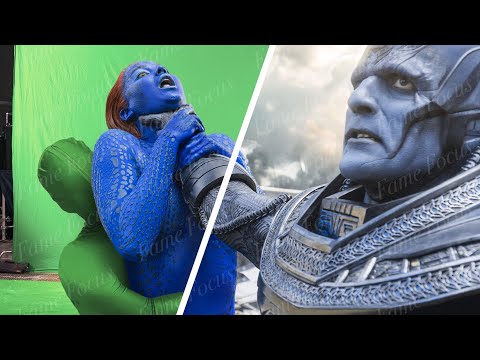 X-men Apocalypse is another big-budget Hollywood blockbuster, with big names, and big VFX. Some critics actually said it overused VFX, Which from our point of view, isn’t really a bad thing!
MPC, Digital Domain, Cinesite, Hydraulx, and Rising Sun Pictures were the VFX houses involved in this movie, and they provided a total of around 1,700 shots.
Like the music in this video?
Get it on Google Play:► ◄
Get it on itunes: ► ◄
Listen on Spotify: ► ◄
Buy it on Amazon: ► ◄

MPC
MPC spread their workload between teams in Bangalore, London, and Montreal, and their main jobs were the realization of multiple mutant powers including:
Storm’s “Weather Control”,
Mystique’s “Body Blades”,
Archangel’s “wings”,
Psylocke’s “Psionic sword and whip”,
Jean’s “Phoenix”,
Nightcrawler’s “Bamf”,
and Cyclops and Magneto’s city destruction powers,
in addition to the creation of the “Cerebro room”, and the “Final Battle” sequence.
This sequence involved creating (and destroying) a 3D digital replica of the city of Cairo.
Modelers used Maya and ZBrush to recreate nearly 60 buildings based on reference photography, a detailed 3D map of the city center was made, consisting of over 150,000 assets and the city’s outskirts were Digital Matte Paintings.
To create these complex destruction sequences MPC used Maya, Houdini, and their own in house destruction tool called “Kali”. This tool is based on DMM or Digital Molecular Matter which is a physic engine by Pixelux. DMM/Kali is a simulation system that can model the material properties of an object, allowing it to break in a certain way depending on the quantity and direction of the stress placed on it.

Rising Sun Pictures
Rising Sun’s task’s included the “rebuilding” at the end of the film, and some small sequences such as the tree destroying scenes. Their biggest job was “Quicksilver’s Rescue” scene.
The idea for this scene was to film as much “In Camera” as possible. This meant Rigs, people hanging from wires, and High-speed Phantom Cameras shooting 3000 fps on 35 mph dolly’s.
Thanks to all this, only 8 full Digi-doubles had to be created:
One was the dog “Tautan” who was scanned and matched to the original photography and then fully rigged and animated.
The four kids that Quicksilver throws out the window were full Digidoubles but with very simple rigging.
The two kids that Quicksilver carries out whilst riding a coffee table required more detail and more complex rigging,
and Quicksilver himself was a full CG Digi-double with fully detailed hair, skin, and clothing, all matched to the original plate photography.
This Digi-double was mainly used in the scenes where Quicksilver zips out of frame and in the “backflip” shot, the rest are a combination of the actor and his stunt double, and some shots actually transition between the three.

Digital Domain
Digital Domain’s main task was the opening sequence of the film where the Egyptians attempt to kill and bury Apocalypse, under a pyramid.
The original plate photography for the starting parade scene, was actually only a few meters of the procession with the “Barge” Apocalypse is sitting on, and around 25 extras.
Digital domain had to create nearly 300,000 digital “extras” which they animated using their own in house crowd software.
Starting from only the plate photography of the Egyptians knocking out the posts that support the block, they created the entire city including the initial establishing birdseye shot of the pyramid and the city.
A lot of work went into the way the sun’s energy was transferred from the pyramid’s capstone, down through the pyramid, and into the bodies. After experimenting with Non-Newtonian fluids and making a version trying out different methods, they decided to treat it like liquid gold through circuits, so the sun’s power would flow slowly through the paths of a circuit board.

Please give us a like if you enjoyed this video, don’t forget the links to the music in this video are in the video description and be sure to let us know, in the comments, which movie VFX you’d like to see behind next!

One of the best X-Men movies of all time

i can't get over the fact that in real life .quicksilvers handling the victims would cause more trauma then the explosion itself..

And movies made after 2010 (with the exception of avatar), using more VFX than anything else, most likely looks very good..
And if the VFX looks that good, that you can't tell them apart from "real", then they can use them as intensively, as they want…

Next X-Men days of future past or Avatar

a table for wasted time and money for the sake of complete nonsense. the film industry is squalor

The effects in this movie were awesome. The writing, and villain, on the other hand… Not so much.

Quicksilver’s slo mo scenes are my fav in the MCU!

I don't understand if the thumbnails are from real footage or what.

Better than marvel. Yet it's less popular because wasnt made by Marvel

What's the name of the Egyptian movie

the thumbnails are hilarious

no,bro when angle get iron wings this is Epic 🔥❤️

The last one almost ended him